Which Tea Has The Most Caffeine

Caffeine is the world’s most natural stimulant, and can be found in more than 60 plant species. Therefore, its immense popularity across the globe is not a surprise. About 4 out of 5 people consume caffeinated products every day.

However, when you are sipping your morning coffee while going over the schedule for the day, you do not give much consideration to its caffeine content. Well, you should—because a moderate caffeine intake benefits your body, but a caffeine addiction could lead to heart disease. The reason being that caffeine gives your blood pressure a boost, and such repeated boosts could weaken your heart’s health.
Remember, the caffeine level of your beverage depends upon the following factors:

To remove your confusion about the caffeine levels of various teas, we have taken the time to dig deep to unearth the factors causing a higher caffeine level in your tea. 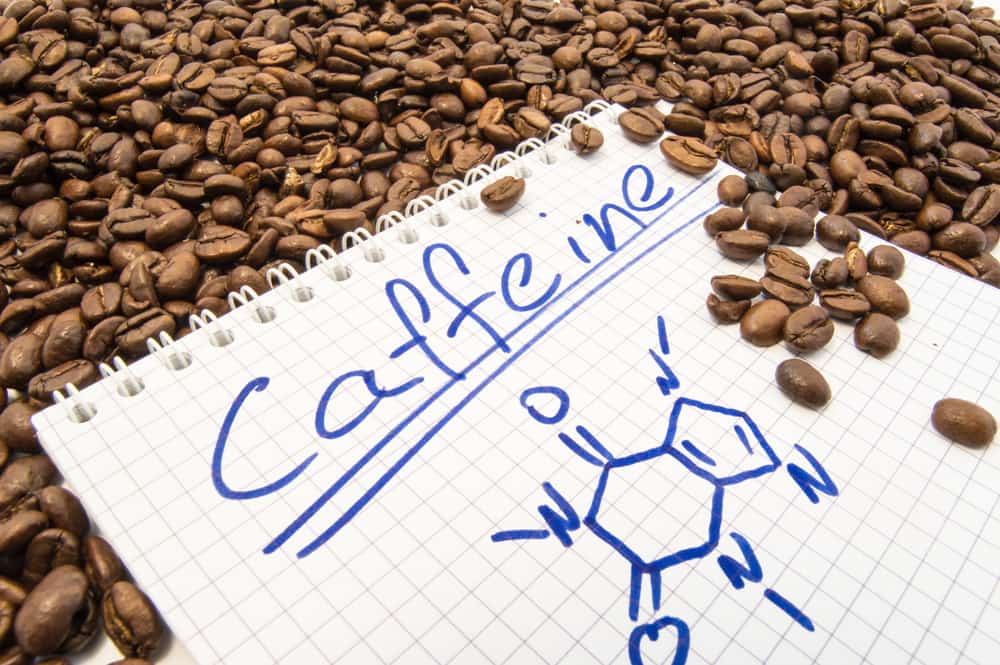 C8H10N4O2 (caffeine) is a chemical compound that can be found in leaves, beans, and in some fruit plants. It is a naturally occurring pesticide for them, that cripples and put to death insects trying to devour them.

Yet, when you consume caffeine, it stimulates your central nervous system to induce a psychotropic impact by increasing your heart rate, respiration, and blood pressure. Also, it’s slightly diuretic.

Caffeine is among the top used stimulants by American athletes, and a moderate intake is allowed by the (NCAA). However, a urine concentration exceeding 15 mcg/mL is forbidden. Nonetheless, the majority of us would need around eight cups of coffee—each carrying 100mg of caffeine—to have that level of urine concentration. 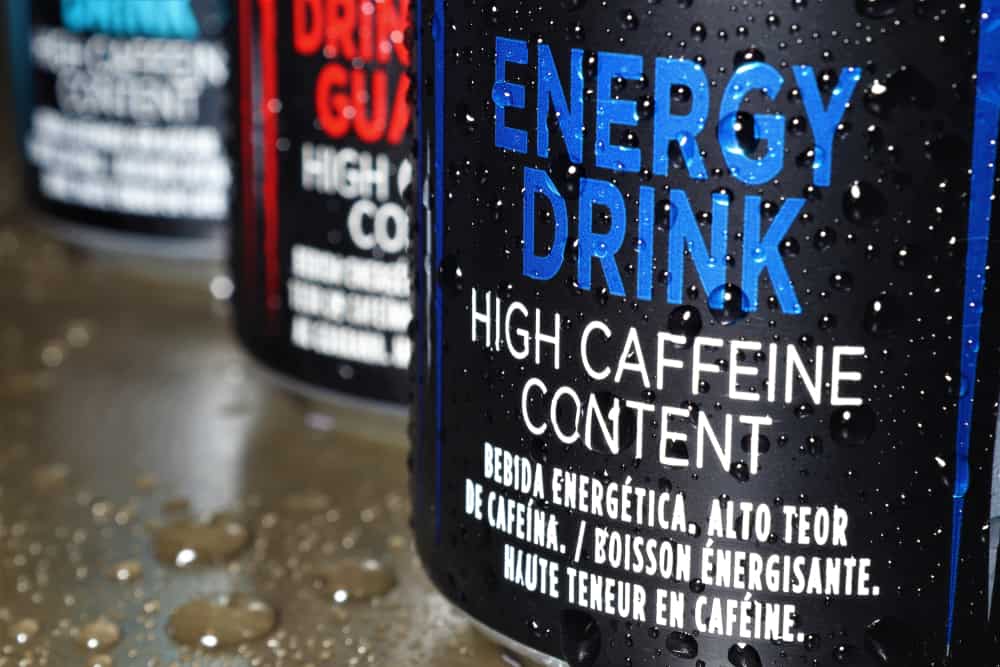 Caffeine operates by stirring your central nervous system (CNS), muscles, heart, and the regions controlling blood pressure. Caffeine may increase your blood flow, if you do not consume caffeine regularly. It also functions as a “water pill” that enhances urine flow.

Lastly, a moderate caffeine intake during a regular workout would not cause you to dehydrate.

How is Caffeine a Drug?

Caffeine becomes a drug when you abuse it, much like alcohol or cocaine, since it fulfills the following criteria:

Reinforcing effects is a medical term for addiction. The rationale being that the more you consume a substance, the more tolerance level you build up, and, therefore, your body craves more of it. Alternatively, your body will suffer withdrawal syndromes, if you stop consuming the substance.

In more extreme situations, you may commit an act subconsciously or otherwise, that may harm you or the society around you. For instance, lack of concentration while driving.

How Much Caffeine is Okay?

According to the USDA and EFSA a healthy caffeine intake per day is up to 400 mg per day, or 3 mg per kg of your body weight.

Your Tea Can Have More Caffeine Than Coffee! There is a widely held perception that coffee contains more caffeine than tea. But is it completely true?

Always remember that the caffeine content in your tea depends upon its type. Typically, a 236 ml cup of tea has half the caffeine levels of coffee. However, different varieties vary greatly on the caffeine amount. For instance, white tea carries only traces of caffeine, while matcha green tea and yerba mate are loaded with it. 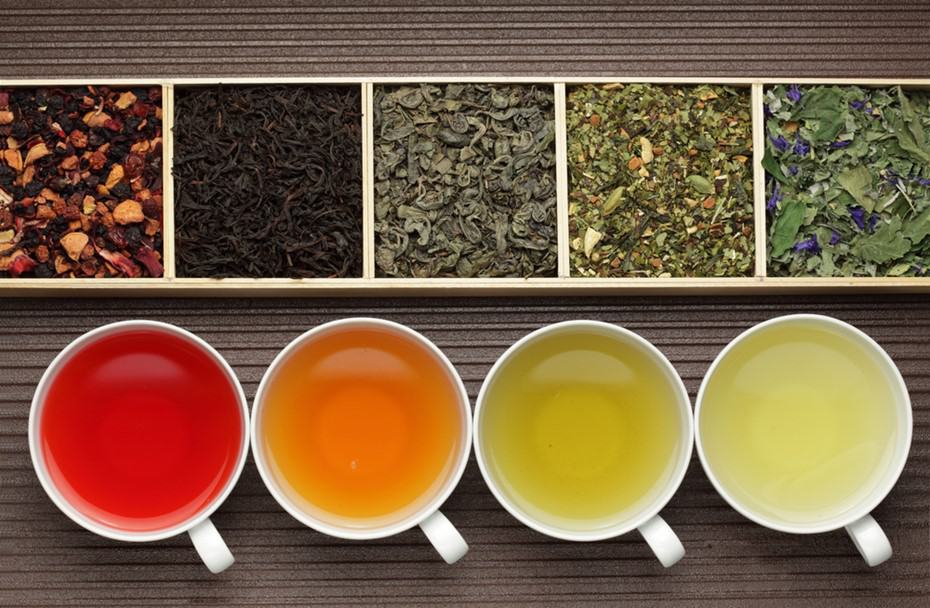 Tea grades are classifications allotted to tea according to the condition of its leaves. There are whole, broken, dust, and fannings leaf grades.

Nonetheless, tea bags do not power your tea enough for it to reach its complete flavor profile and aroma. As a result, your taste is more subdued compared to loose leaves.

How Oxidation Impact The Caffeine Level?

Oxidation plays a pivotal role in determining a tea’s caffeine level. It is a chain of chemical reactions which turn the tea leaves brown and affect the flavor, aroma, and caffeine level of the final drink.

To oxidize the leaves, they are rolled to generate cracks so the oxygen interacts with the enzymes of the plant. The less the process of oxidation, the lighter the caffeine level. Generally, black tea goes through the most oxidation, while white tea the least.

Which Tea Has The Most Caffeine?

Black, white, oolong, and green teas are all made from the leaves and buds of the Camellia sinensis plant. The leaves distinguish themselves through the levels of oxidation they go through and the time of harvest.

The bottom line is that you can process freshly picked green tea leaves into black, white, or any other variety. 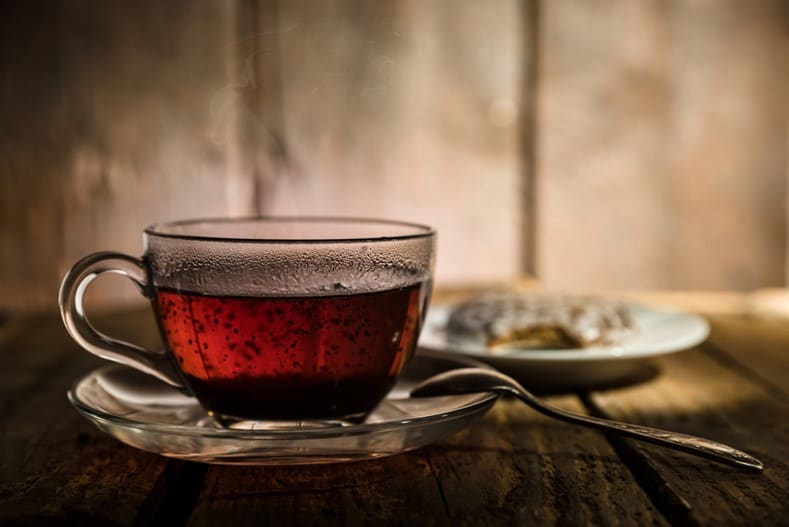 Black tea leaves are completely oxidized compared to the white and green tea leaves. This thorough oxidation spikes the infusion of caffeine content into hot water besides according this tea type a distinctively sharp and bold flavor. Black teas like English Breakfast and Earl Grey are the most oxidized as well as flavorful varieties, also making them the most caffeinated ones.

Black tea originated in China in the mid 1650s.

Related: Best Black Tea: Everything You Need to Know 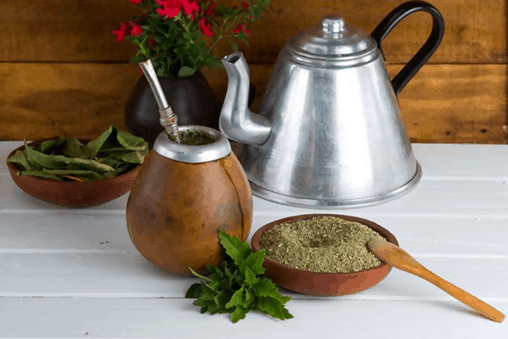 A hot beverage packing the power of coffee, the nutritional gains of tea, and the splendor of chocolate is sure to carry loads of caffeine. Yet, it is rich in antioxidants, and carries 15 amino acids as well as 24 minerals/vitamins.

Yerba Mate comes from the South American region, and is sourced from the leaves of botanically-named Ilex paraguariensis plant. Moreover, it has less tannins than tea, and is not acidic like coffee—this combination is fueling its global popularity.

Your 236 ml cup of yerba mate typically packs up to 85 mg of caffeine. 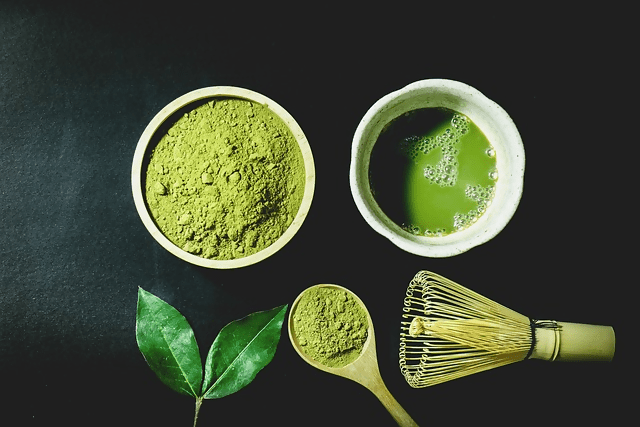 Matcha tea is Japanese, and is made by crushing green tea leaves into refined powder. The powdery form is added to steaming water to make a shiny, frothy green beverage with a naturally occurring sweet flavor.

Your 236 ml tea bowl with 2 grams of Matcha powder usually contains about 70 mg of caffeine. The content marginally depends upon the quality and type of the Matcha used. On the other hand, Thick Matcha (Koicha) is made with twice the amount of powder (4 grams), which, of course, doubles the caffeine content.

This type of tea is rich in antioxidants courtesy of the nutritional power of the whole leaves. Today, matcha is gaining much popularity in the American coffee houses, and is regularly added to smoothies, lattes, and other drinks to enrich their flavor profile. 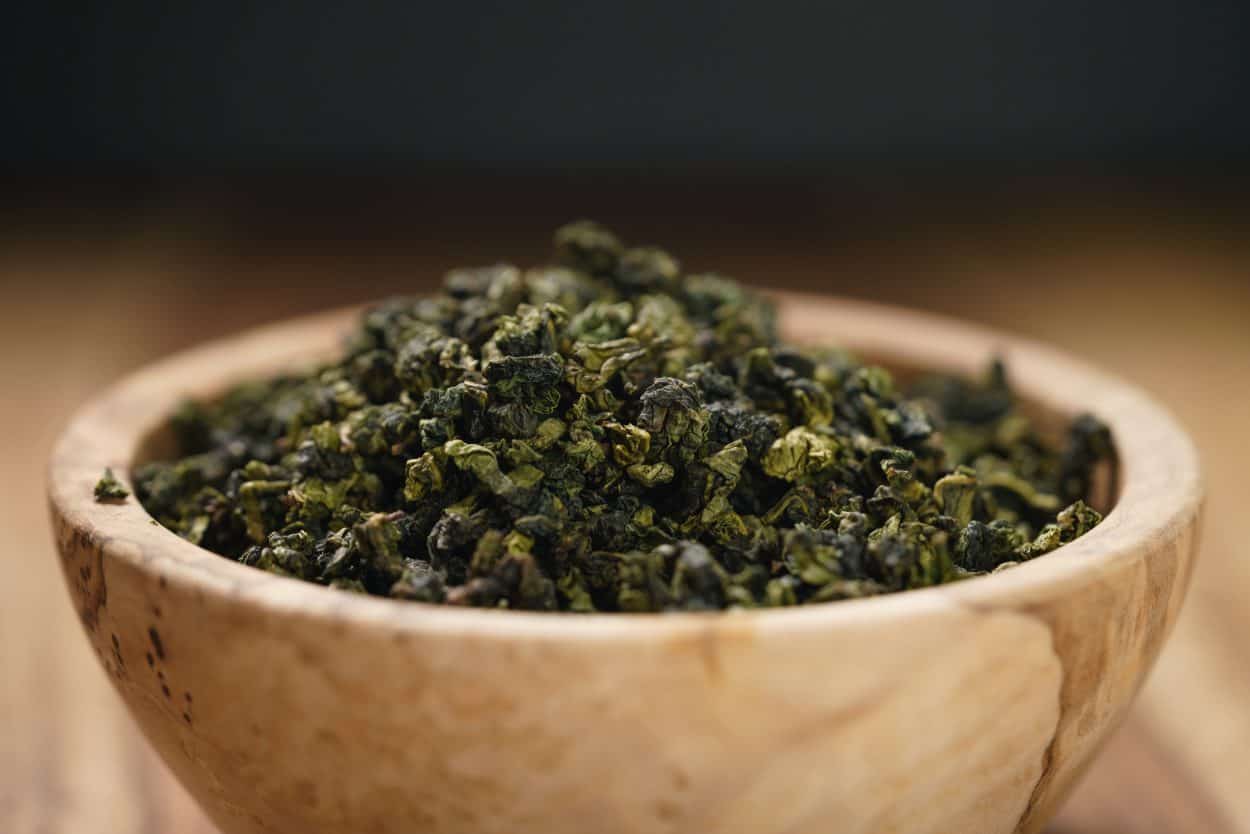 Oolong tea places itself between the black tea and its green variation on the oxidation scale. It’s an acquired taste, as only 2% of the global tea consumption is oolong tea. The color can range from black to darkish green.

The blend of partial oxidation and bruising accords oolong a distinctively earthy and flowery flavor. In fact, the darker variety offers a smokey flavor with buttery undertones.

Your cup of oolong tea (236ml) carries 50 – 75 mg of caffeine. Oolong is immensely popular in Southeast Asia, and hails from China. This type of tea assists in losing weight, lowering cholesterol, and stabilizing your blood sugar level. 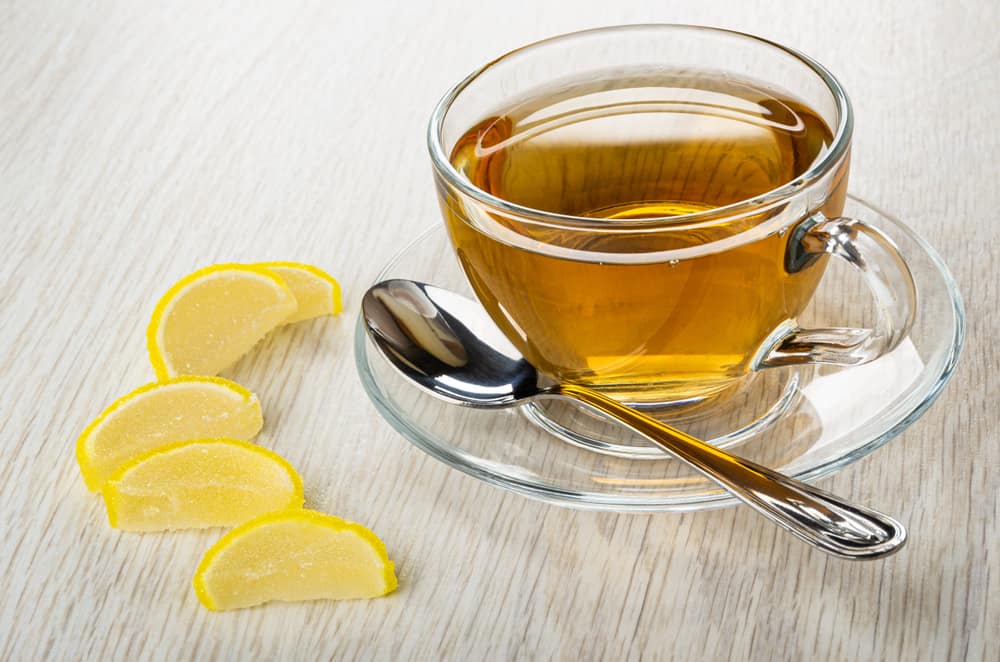 The yellow variation of tea is gaining worldwide traction due to its unique flavor profile—which is a blend of green and black tea.

It is made only with the leave buds of the plant (Camellia sinensis). The leaves processing method is similar to the one for the green tea. However, the leaves are deliberately kept damp until they turn slightly yellow.

This partial oxidation takes away the grassy taste of green tea without compromising on most of its benefits. 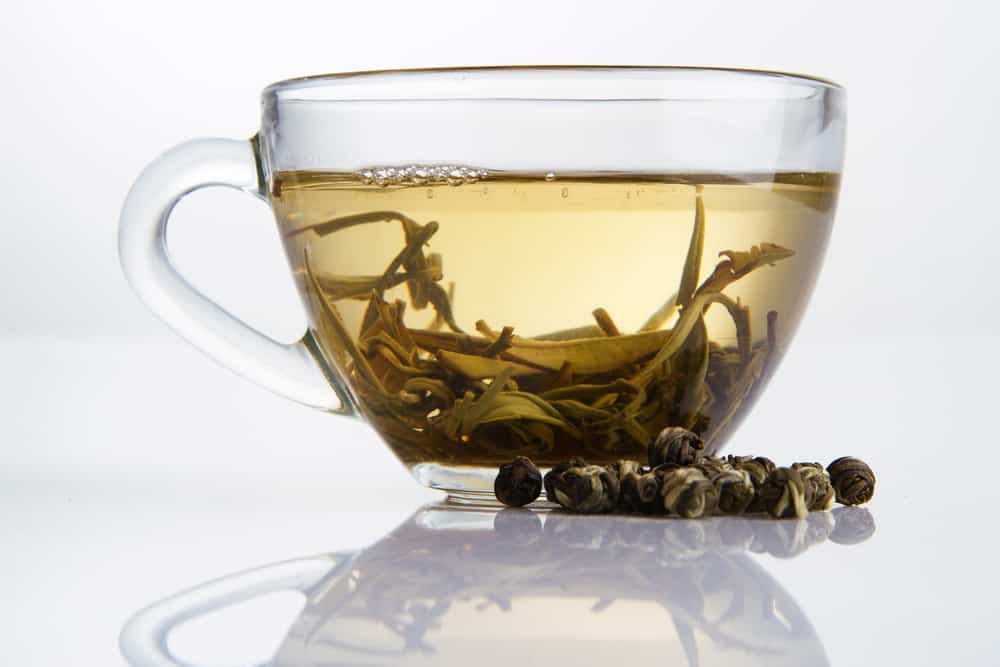 Unfermented tea leaves are used to make the white tea. These leaves are plucked just before their blossoming time, and are dried in the shade as well as in the sun. It goes through slight oxidation, offers a flowery, sugary flavor profile.

Your cup of white tea (236ml) normally carries 28 mg of caffeine. However, the eventual caffeine content depends heavily on the quality of the leaves, the steeping time, and the blend used by the manufacturer. For instance, Exotica by China White Tea carries almost 60 mg of caffeine per two grams of tea.

More: Is There Caffeine in White Tea? 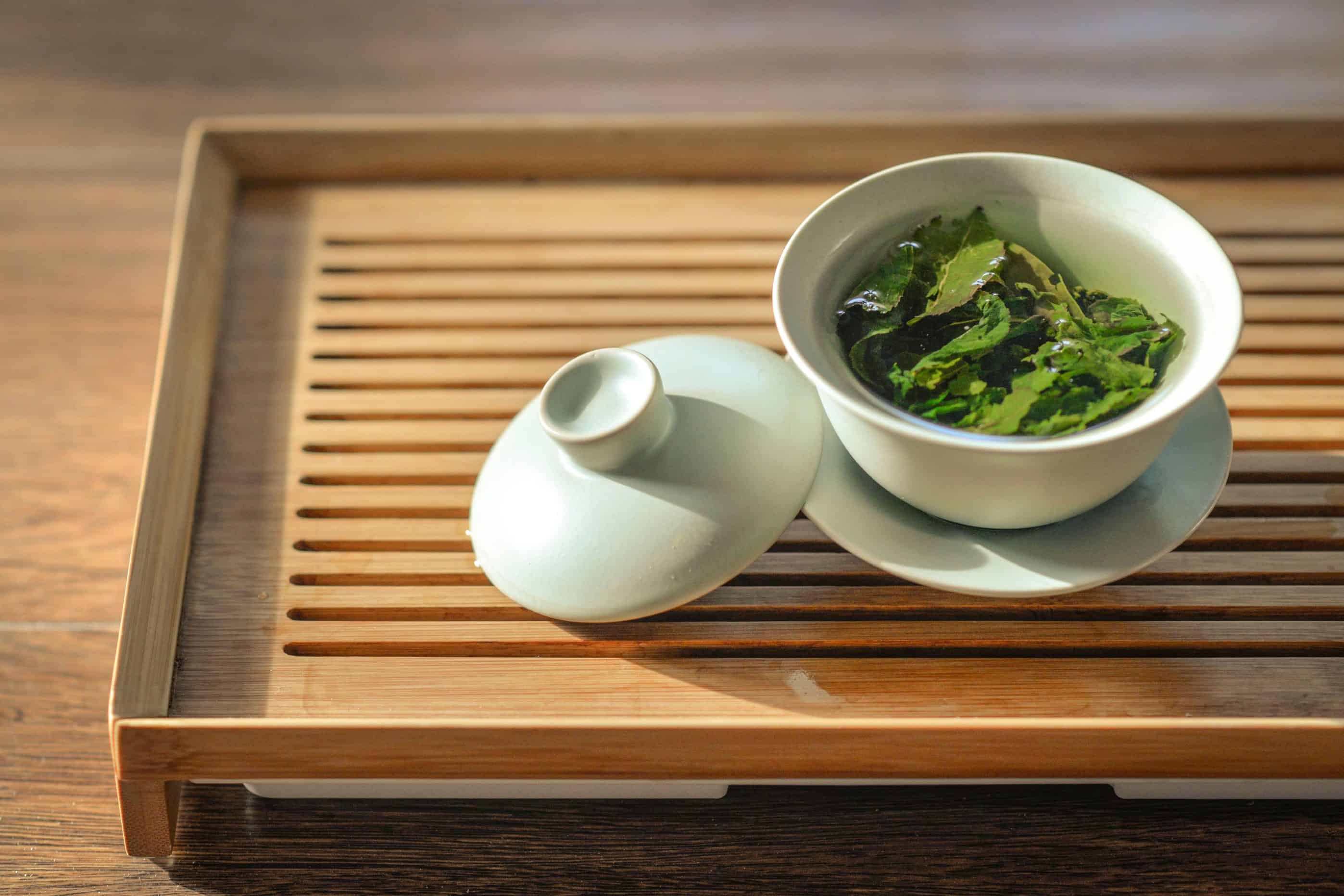 Green tea doesn’t get oxidized. The process is ceased through the Japanese steaming or Chinese pan-frying methods. The more the leaves are processed, the greater the flavor profile becomes. Distinctive green tea flavors are vegetal, grassy, and earthy, with sugary notes.

Your cup of green tea (236ml) generally carries about 25 mg of caffeine. However, it is quite difficult to attribute an exact caffeine amount to green tea, since the content depends upon many variables. For example, the quality of tea-leaves, processing machinery as well as an extended brewing time will enhance the caffeine amount.

More: Caffeine in Green Tea Everything You Should Know

Which Tea Should I Drink?

if you’re a fan of high-caffeine drinks, you may enjoy teas with higher caffeine content, such as black and green varieties.

Conversely, if you are sensitive to the effects of caffeine, consider sticking to teas lower in caffeine like herbal or white teas. You might also want to brew high-caffeine teas for a briefer time, such as one minute instead of three.

Moreover, picking a decaffeinated tea is a pragmatic way to relish the taste without much caffeine. However, those with heart ailments, migraine tendencies, or on regular medications should curb their caffeine intake.

Pregnant women or those breastfeeding should not consume more than 200 mg a day.

Caffeine is the world’s most natural stimulant, and 4 out of 5 people consume a caffeinated product every day. However, the majority doesn’t give much consideration to its caffeine content.

Always remember that the caffeine level of your tea depends upon the leaf’s age, processing method, water temperature, and steeping time.

Black, white, oolong, and green teas are all made from the leaves and buds of the Camellia sinensis plant. The leaves distinguish themselves through the levels of oxidation they go through and the time of harvest.

The bottom line is that you can process freshly picked green tea leaves into black, white, or any other variety. Here are your caffeine levels: