Is There Caffeine in White Tea?

Sure, we all know that tea contains caffeine… but how much? And, more importantly, does the caffeine level in tea matter for your health and well-being? When it comes to white tea, you’re probably drinking it for the health benefits over black tea or because you love fine tea tastes. You might make the assumption that white tea, like green tea, contains less caffeine. But that’s not strictly true! 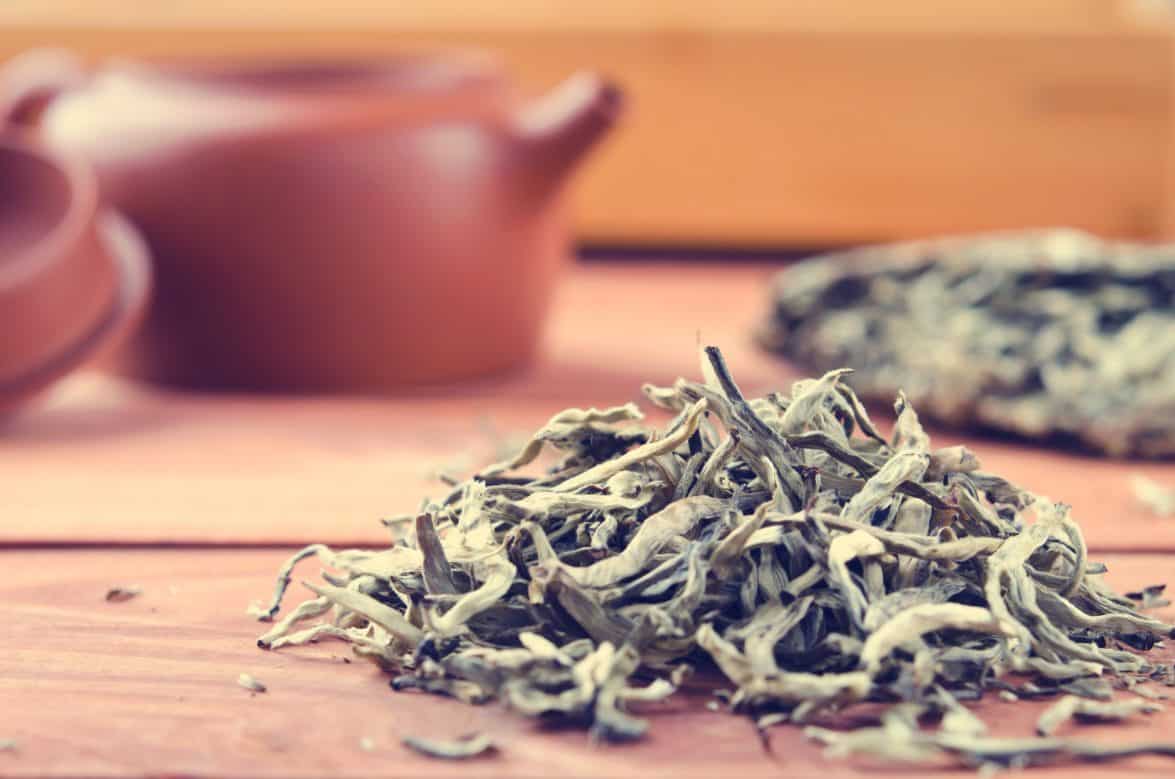 Yes, white tea contains caffeine just like black tea, green tea and all other kinds of tea. Even decaffeinated tea will still contain caffeine, but just a few mg. The key thing to understand about caffeine in tea is that compared to energy drinks (150mg per can) and coffee (90mg for a drip coffee oz), tea has a much smaller amount of caffeine in it. Tea leaves also contain nutritious molecules including amino acids and antioxidants (namely ECGC), which alter the effects of caffeine on your body and offer more significant health benefits.

The caffeine in white tea works by blocking adenosine receptors. Adenosine otherwise makes you feel drowsy and tired, so by blocking the receptors your brain will stay awake and alert for longer, until the caffeine wears off.

More: Which Tea Has The Most Caffeine 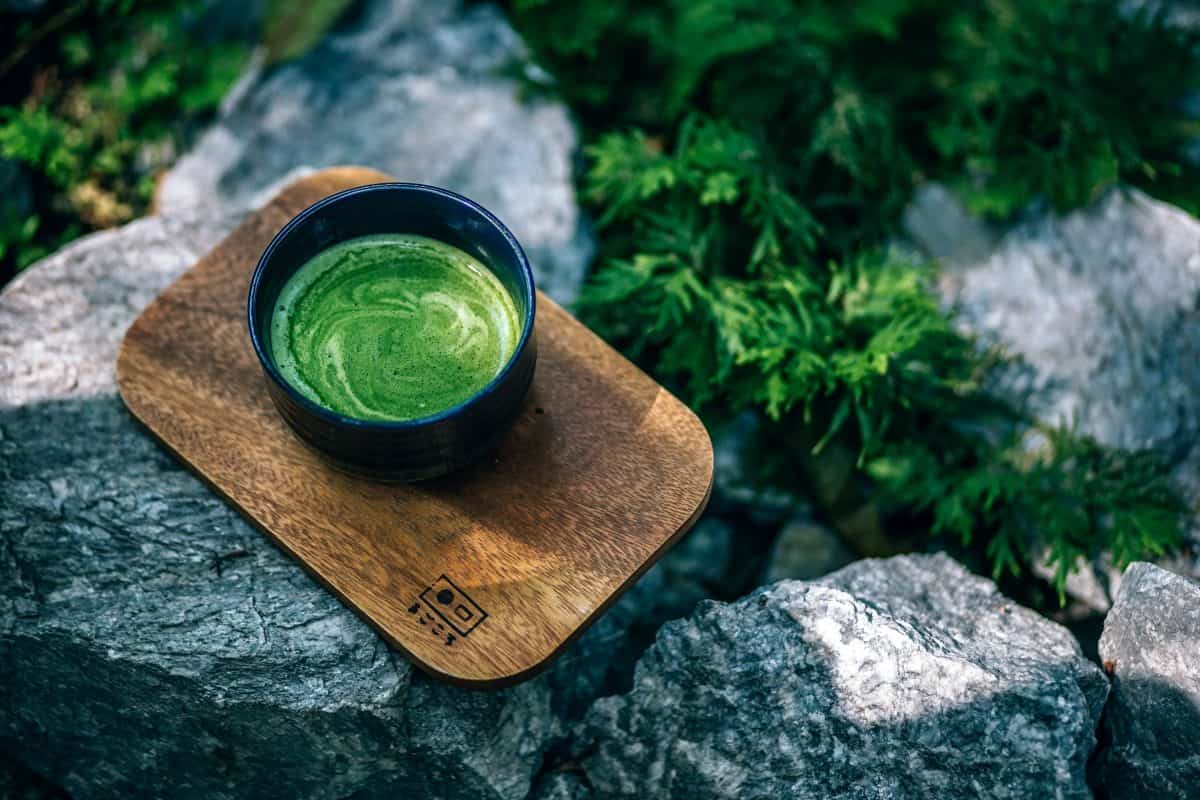 All teas, including white teas, are a good source of L-Theanine. Every time you drink a cup of tea, you’re getting a healthy dose of this amino acid.

You might have noticed these effects after drinking a cup of tea:

L-Theanine works by boosting the calming neurotransmitters and blocking those that cause stress. When the caffeine wears off and the flood of adenosine reaches your brain, the L-Theanine keeps you calm and relaxed rather than jittery and overly tired. You can read more details about how L-Theanine works biologically in Psychology Today.

How Much Caffeine Is in A Cup of White Tea 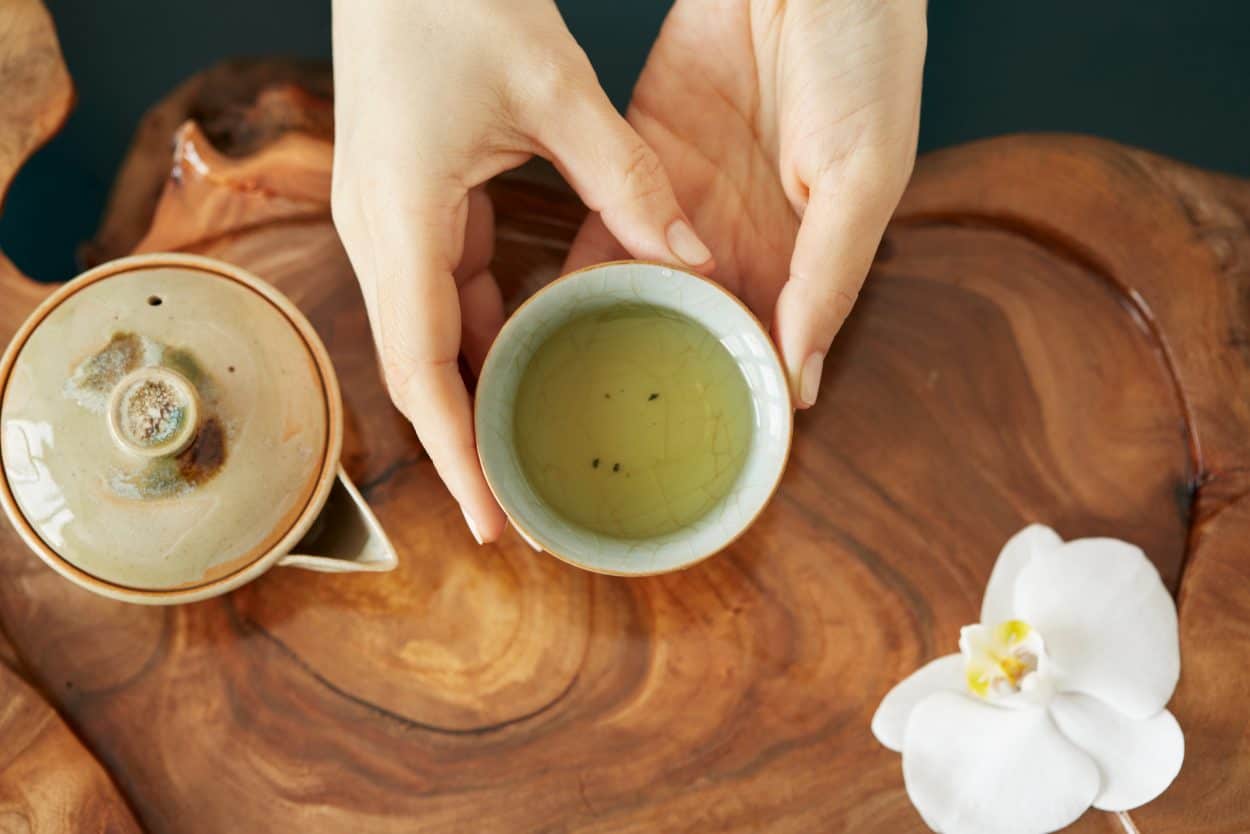 The current recommendations for caffeine consumption by regulatory health bodies are 400mg per day for adults and 200mg a day for pregnant women. So, you’d need to drink at least 10 to 20 cups of white tea per day to even get close to that limit.

In reality, a cup of white tea can contain as little as 5mg of caffeine or as much as 70mg. Either way, you’re still way under the recommended limit.

While you might feel the awakening effects of the caffeine after 1 cup of strong white tea if you are particularly sensitive to caffeine, it’s not going to cause any jitters or energy crash afterward.

You might find it difficult to find exact caffeine level figures from tea brands for a few reasons. Firstly, some white tea bags will contain a combination of different white teas from different locations that are changed throughout the year for availability, so working out a consistent caffeine level is impossible. There’s also the problem of preparing the white tea.

The amount of leaf you use will alter the amount of caffeine, obviously. But the water temperature and steep time also affect caffeine levels. Boiling hot water and a long 6-minute steep time will really draw out all of the caffeine held in the leaves. It won’t taste particularly nice, but it will have the highest levels of caffeine and other nutrients from the tea leaves.

Buds vs Leaves vs Stalks

Different parts of the tea plant contain different levels of caffeine. The small, fresh tightly closed buds and first shoots will contain a higher concentration of caffeine compared to the older, larger leaves.

So, the higher the tea grade and the younger/fresher the buds and leaves, the more caffeine there will be. In some cases where tea is made entirely from fresh white tea buds, there may be more caffeine than a green tea or even black tea!

Silver Needle and White Peony will contain more caffeine than the lower grades, Tribute Eyebrow and Long Life Eyebrow. For more information on what the difference is between white tea grades, check out our Ultimate Guide to White Tea.

Yes, it does! True white tea, not just tea leaves processed in the same way as white tea, is from around the Fujian province in China. It’s here that white tea is born and if you want an authentic white tea you should definitely buy white tea sourced from this province.

White teas from other locations around the world, Darjeeling white tea from India for example, is from different tea plant varieties. These varieties and the processing methods used can result in wildly different results – both in flavour and caffeine levels. They might be delicious but if you’re looking to make strict changes to your caffeine intake, it’s best to make sure you are drinking a true low-caffeine white tea from China. 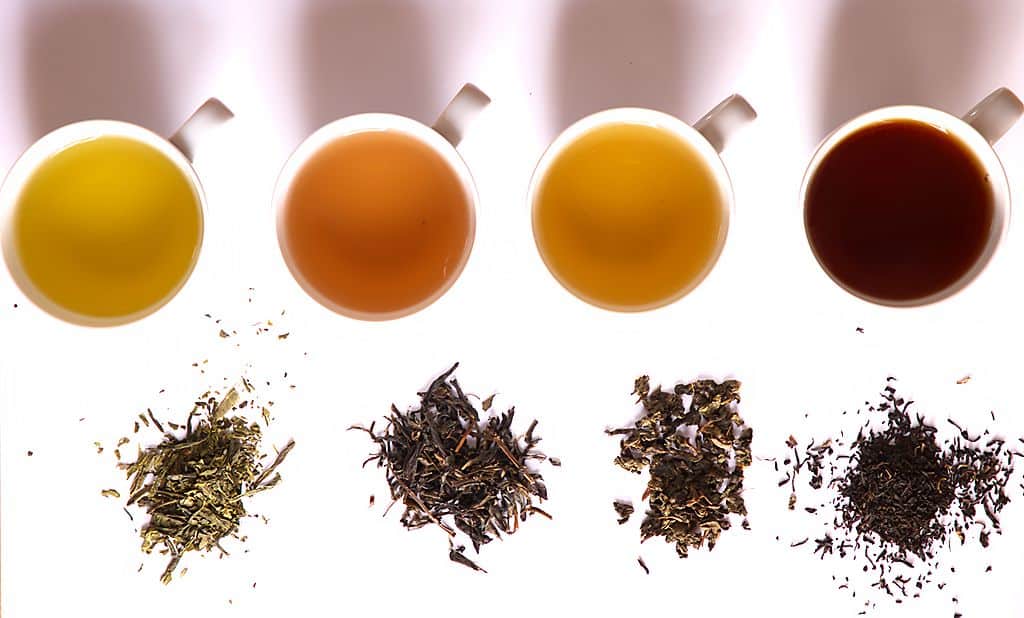 If you’ve been drinking green tea and black tea fondly for years, you’re probably considering branching out and try other tea types. Here’s how white tea stacks up against other tea types for average caffeine content and health benefits:

Health Benefits: The same as white tea but with a higher level of caffeine and slightly lower levels of antioxidants, depending on the size of the leaves/buds used.

Health Benefits: Similar to green tea, yellow tea undergoes an extra stage of steaming and slight oxidation to reduce the grassy edge and create a smoother flavour. As such, it still retains much of the ECGC antioxidants and polyphenols, while also potentially having a few theaflavins from the oxidation process (more about theaflavins next).

Health Benefits: Caffeine and L-Theanine, plus some antioxidants and good levels of theaflavins. Theaflavins are polyphenols unique to black tea which are linked to increased antioxidant production and can significantly reduce your cholesterol. Drink black tea without milk for these health benefits.

Black tea has very little or no ECGC as it’s destroyed when the leaves are oxidised. Thus, black tea has lower levels of antioxidants in general.

Health Benefits: Oolong teas can be as light and grassy as green tea or as oxidised as black tea, so the health benefits and caffeine amount that ends up in your cup will depend on the specific oolong as well as how you brew it. Greener, less oxidised, oolongs tend to be healthier as they contain more antioxidants and ECGC.

Health Benefits: The same as black tea but intensified. Due to the long oxidation process there’s no ECGC, instead you’ll find cholesterol-reducing theaflavins along with the L-Theanine and caffeine.

Pu-erh tea is naturally fermented after it’s processed and left to age – sometimes for decades. Like oolong, green Pu-erh tea will have less caffeine (30mg to 40mg) while a black Pu-erh with have more caffeine (50mg to 70mg). Read more about Pu-Erh tea types in our article about The 12 Different Types of Tea.

Health Benefits: Without the L-Theanine, the caffeine in coffee gives you all the energy without the calmness. You might also experience a caffeine crash or jitters when it suddenly wears off. There is some evidence that regularly consuming a sensible amount of coffee can protect you from Alzheimer’s, dementia, type 2 diabetes and Parkinson’s.

Should You Worry About Caffeine 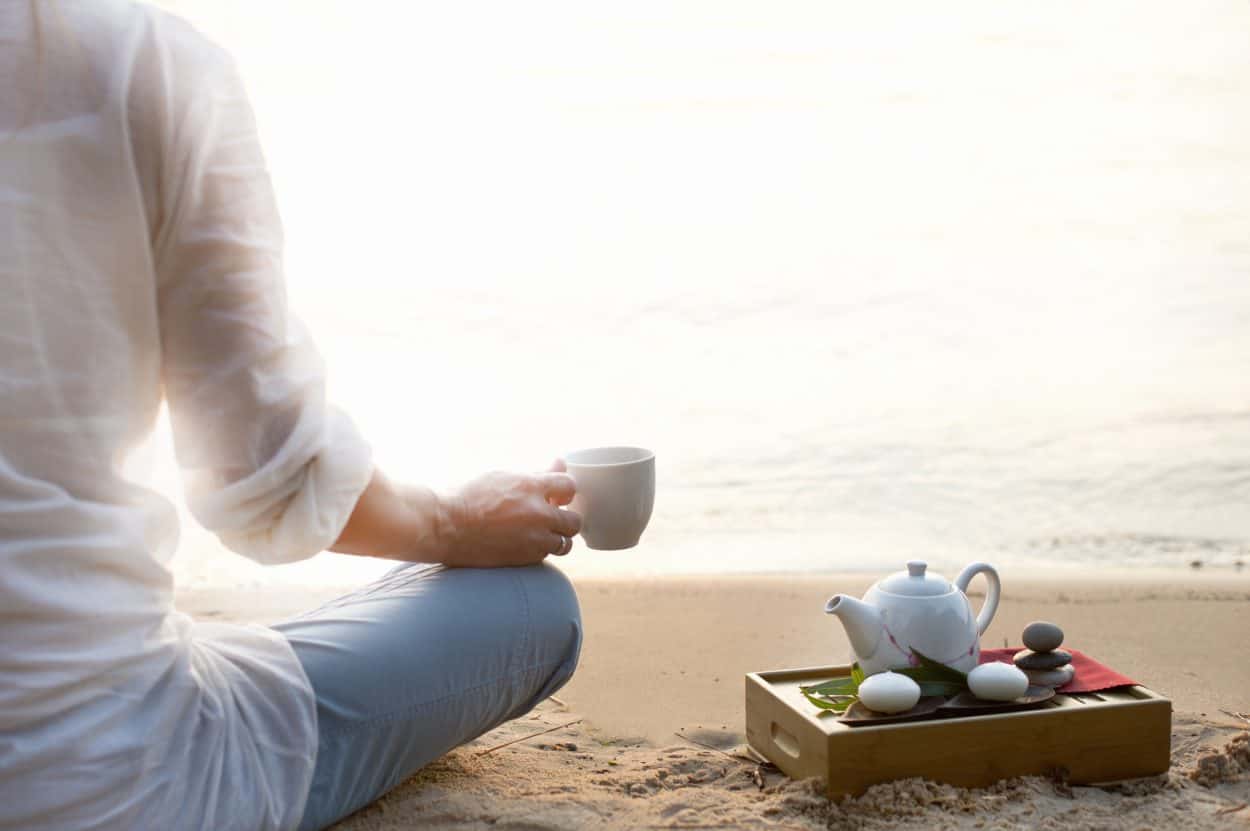 There are some side effects of consuming a large amount of caffeine every day. If you drink more than 20 cups (8oz) of white tea per day for a long period, you could experience some negative health effects, including:

If you’re accustomed to drinking caffeine drinks, whether it’s a cup of coffee or black tea every morning, it’s unlikely that you will feel the effects of caffeine from one cup of white tea. You may even find that you can drink it before bed and not have any trouble sleeping.

If you are very sensitive to caffeine, you might want to start with a low-caffeine white tea so you can judge how much is right for you. Look for larger leaf white teas rather than silver needle and tiny bud white teas. You can even try decaffeinated white teas, which may only contain 2mg of caffeine or so per cup.

Caffeine Has Health Benefits Too!

Drinking a sensible amount of white tea (5 cups, for example) each day provides you with a sensible dose of caffeine that can actually have some health benefits. 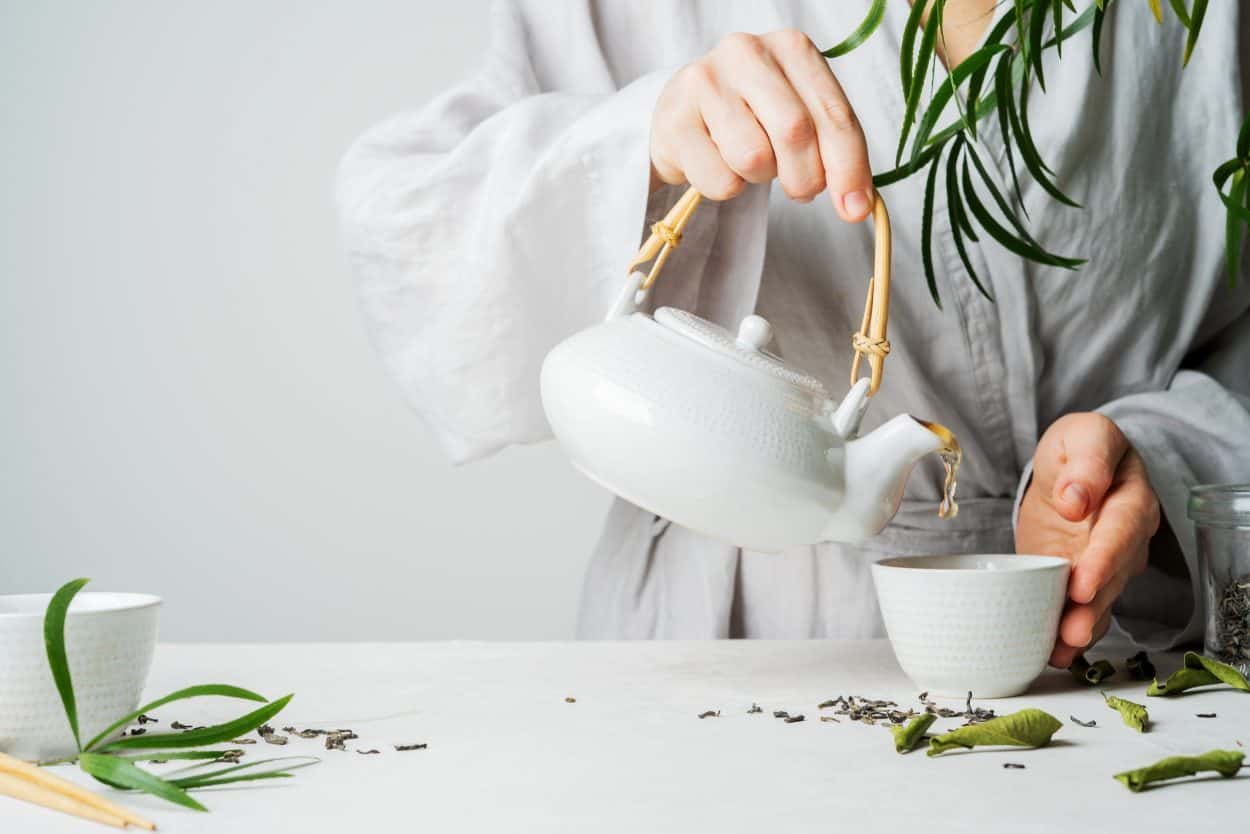 Consuming 1 or 2, or even 5 or 6, cups of white tea per day is not going to cause you any long term or short-term health problems from the caffeine content. You only need to worry if you’re drinking an absurd amount all day every day!