Tea. One quick sip of a good cup is enough to understand why it’s the second most-consumed drink in the world, second only to water.

Aromatic, wholly natural, and loaded with antioxidants, it’s no surprise that tea drinking culture has kept on through the ages. However, this universal drink has not always been here.

The history of tea spans a complicated and extensive tree that spreads across multiple cultures dating back to thousands of years.

Before becoming Britain’s favorite pastime, tea traces its oldest roots to the Yunnan region of China. Evidence found in 2016 indicates that emperors of the middle kingdom drank tea as early as the 2nd century BC.

Since then, the drink has gone on to become an essential element in many eastern cultures. The rest of the world is not left out in the movements. Elsewhere, tea has found root in other places like in Britain who has has a tea-drinking tradition for over 350 years.

As you would expect from a beverage with such a broad reach, tea is available in a wide range of styles and with different ingredients. The plant itself spans several varieties and cultivars with differing characteristics.

However, all pure teas come from variants of the same Camellia Sinensis (tea) plant. Based on how it is processed, tea variants fall into five major groups: Black tea, Green tea, Oolong tea, Pu-erh tea,  Jasmine tea, and White tea. 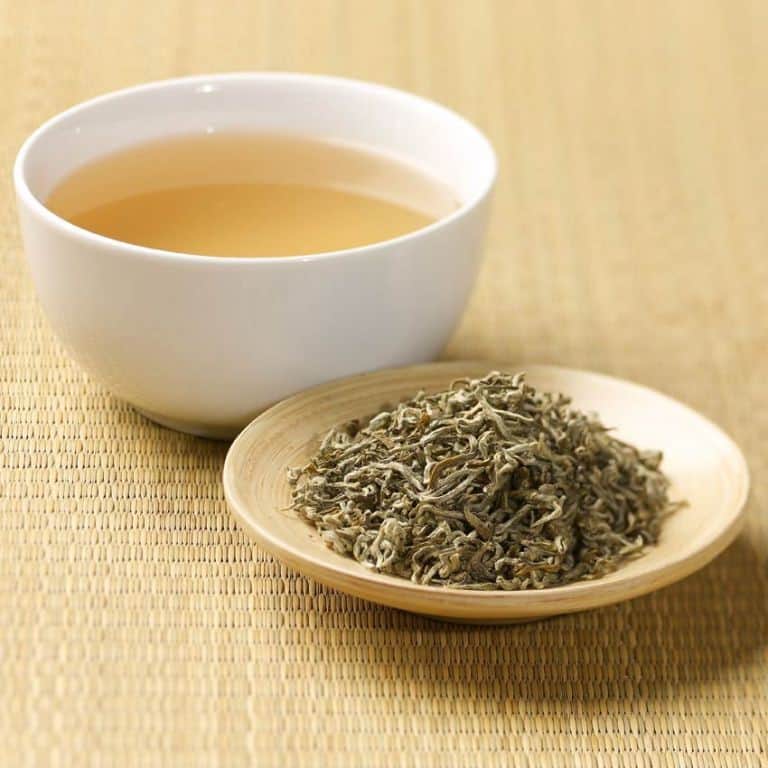 White tea offers one of the mildest variants of the tea beverage.

The main factor differentiating this type of tea is that, of all the tea types, it employs the most minimal processing. Hence, white tea variants give you a brew that retains nearly all its natural constituents.

The selection for white tea begins at the harvesting stage. When sourcing leaves for white tea, only the young buds still covered with white hairs meet the cut. The plucking of most white tea leaves occurs even before they reach the full form.

The tea leaves are then immediately dried, allowing room for as little oxidation as possible. The leaves are not rolled, and there is no secondary oxidation process, allowing the tea to retain its signature mild taste.

Popular white tea variants include Silver Needle, White Peony, Long Life Eyebrow, Tribute Eyebrow. The Silver Needle is famed for its pearly white color and side sweet, delicate flavor. It is by far the most exquisite white tea you can get on the market.

To the uninitiated, finding out that both green tea, white tea, and black tea are from the same plant may come as a shocker. However, all their differences in texture and taste all come from different modes of processing each variant.

For green tea, mature tea leaves are harvested from the plant, quickly heated in a pan or steamed, and then dried. The heating and drying prevent the leaves from over oxidation as that would turn them brown and result in more astringent black tea. Steaming also helps to expose the fresh, grassy flavor of the leaf.

Thanks to its massive popularity, there are many variants of green tea. Popular green tea types include gunpowder green tea, Bancha tea, and China green tea. Gunpowder tea is fluoride-rich and has a smoky flavor, while China green tea sports a subtle, earthy note that is excellent for daily consumption. Bancha is one of the cheapest drinks in the world. Relatively, it also has one of the lowest caffeine content.

While it is one of the healthiest drinks you can get, a tiny subset of users can still have adverse reactions. These side effects typically only affect people that are sensitive to tannins or caffeine.

Common symptoms of sensitivity include stomach issues, headaches, insomnia, vomiting, and dizziness. If you experience any of these side effects, you should always consume in moderation. Pregnant women and breastfeeding mothers should exercise caution too.

Since both white tea and green tea come from the leaves of the same plant, it is no surprise that they sport similar nutritional profiles. Both beverages feature negligible calorific imprints.

Hence, you can consume multiple teacups at a go without ever disrupting your diet. Tea contains zero protein and zero fat. A 6-ounce cup of either variant only amounts to a single calorie.

Both teas contain relatively high amounts of essential minerals like calcium, magnesium, iron, zinc, sodium, and nickel. Tea also brings a healthy dose of vitamin B2, C, D, and K. However, where tea genuinely shines is its massive array of antioxidants.

Tea has been a topic of chemical debate for hundreds of years. However, folk medicine has stayed sure of the beverage’s life-giving powers. In recent years, scientists have begun to verify its many constituents and their health benefits.

For an almost zero-calorie beverage, tea has complex chemistry. Each cup of white or green tea contains over 5000 compounds, many of which are still unanalyzed.

Some of the essential active agents found in tea include polyphenols, amino acids, enzymes, pigments, carbohydrates, methylxanthines, minerals, and many volatile flavor and aroma compounds.

However, for most people that take tea for the health benefits, polyphenols, and more specifically flavonoids, are the only compounds of consequence.

The most active of the lot is EGCG, and it is consequently the subject of many tea studies. EGCG is a powerful antioxidant that has therapeutic applications in cancer treatment and in easing various other body disorders.

During tea oxidation, the flavanols metamorphose into theaflavins. Theaflavins are responsible for the deeper palette and the darker colors in more oxidized teas like green tea and black tea.

Consequently, it is a widely held belief that white tea contains more EGCG than green tea as the former is relatively less oxidized. However, one 2010 study in the Journal of Food Science could not find any absolute difference in catechin content by tea type.

A better strategy, if you want to optimize for catechins, is to opt for the freshest, fullest tea leaves and buds.

Caffeine is another major bone of contention in the white tea vs. green tea debate.

While it is a popularly held belief that white tea contains less caffeine, how much of it you end up within you cup depends on a few factors.

Depending on the variety and cultivar, tea types can range anywhere from 10 to 60mg of caffeine per 6oz serving. Also, teas with a high frequency of young buds often produce a more caffeinated result.

Steeping is also another factor. The longer you steep and the more temperature you apply, the more caffeine you’re going to extract from the leaves.

Hence, judging your tea purchase based on perceived caffeine content is not the way to go. If you are particularly keen on avoiding caffeine, you should opt a decaffeinated white tea or green tea instead.

More: Which Tea Has The Most Caffeine

One area where the potency of tea is almost universally accepted is weight loss. Hence, consuming tea (whether green tea or white tea) as part of a healthy weight loss diet is an excellent choice.

Tea has been shown to enhance your metabolic rate and result in a faster burn rate of calories during the day. Its rich store of antioxidants and minerals help boost energy expenditure and improves the fat oxidation process.

While the polyphenols in white tea and green tea may vary from sample to sample, there is no reliable study out yet that pits the weight loss effects of both beverages.

However, whichever option you pick is bound to produce positive results. A more critical worry is to avoid sugar, milk, or other sweeteners as these can quickly rack up the calories.

EGCG, the principal active agent in both green tea and white, is also responsible for numerous other benefits. This flavonoid helps to lower cholesterol, reduce the risk of cancer, and boost cardiovascular health. The antioxidant also heals free radical damage that can result in exacerbating more chronic illnesses.

Both white tea and green are available in different variants that range from dirt cheap to quite expensive. Prices often vary depending on the season or the availability of produce. However, green tea is almost more readily available than white tea because of its popularity, especially in the US.

Picking any tea variant from the will give you a decent share of its healthy antioxidants. So, irrespective of the specific benefits you want, getting a batch of tea is more important than which type you pick. Focus instead on picking out the right taste and flavor to make your drinking experience as enjoyable as possible.